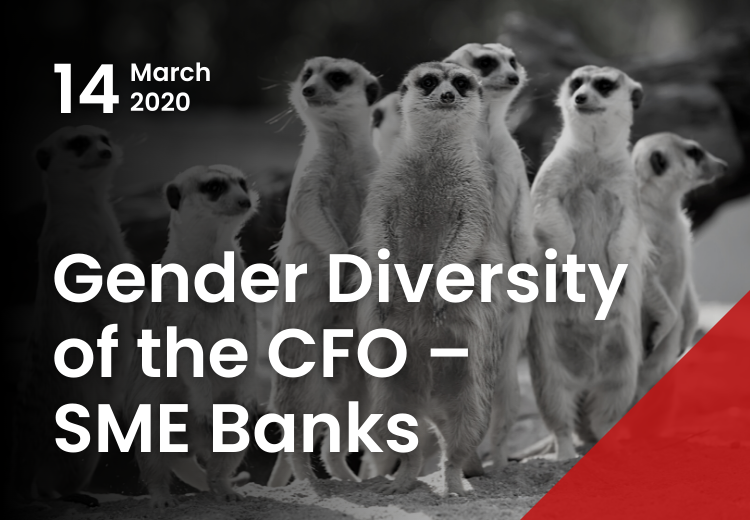 The Author
James Sayer is Managing Partner at Sayer Haworth Executive Search. For over 20 years, having lived and worked in the UK, Europe and the Middle East, James has acted as a trusted business partner to source senior leaders within Financial Services

12% of the population from a survey of 75 CFO’s in Small to Medium Sized Banks are Female
Guide on average Base Salaries for all CFO’s are £125,225 – £230, 750
A need to further encourage gender talent within Small to Medium-sized banks

Sayer Haworth has carried out a survey on gender diversity of CFOs within the Small to Medium-Sized Banks in the UK. This data has also been verified on actual CFO searches executed and delivered on.

The Banks surveyed have an average employee size of 40 – 500. The Balance Sheet of these banks are from £450 million upwards.

The reality of Gender Diversity

Our survey of 75 Banks revealed that 12% of the CFO’s are female where the individual is the designated SMF 2. Where there is a general focus on the larger Banks, there is a clear need for the Smaller firms to review the current gender diversity within the wider Executive Team.

The introduction of the Women in Finance Charter, which is a government-led initiative to encourage financial services firms to sign to a charter promoting gender diversity. The charter states, a balanced workforce is good for customers, profitability, and workplace culture.

Nicky Morgan MP, who sat on the Treasury Select Committee was leading the drive on firms to sign up to this Charter.

The Women in Finance Charter was first published in March 2016 and commits firms to support the progression of women into senior roles, to publicly report on progress on delivering internal diversity targets, and have at least one member of the executive team responsible and accountable for gender diversity and inclusion.

Our findings did not find any major disparity in compensation based on the gender of the individual.

The general range of a base salary for a CFO in this segment of banking is between £120,000 – £250,000. The salary on the whole in our findings forms the largest part of the remuneration for the CFO.

The salaries on offer at the lower end of this scale were with Banks that have a small operation in the UK, these banks would have on average employees from 25 – 50. The median base salary for CEO’s in this segment is £142,000.

At the higher end of the scale, this would be banks that are large full subsidiaries in the UK, the number of employees would be up to 500. The median base salary for the CFO in this segment is £205,000.

The average Bonus paid in Small to Medium sized Banks ranges from 15 – 76%, a median bonus of 57% was being achieved.

Summary
Our research into this subject has revealed that there is a need for Small to Medium Sized Banks to look at gender diversity in the overall Executive team. This research focused on one function, the CFO, however other mandates that we have executed demonstrates there is a large gap of females to males in the top jobs in Banks.

The current programs for hiring in the firms should be considered, we would always advocate for the best person for the role, however, consideration needs to be taken in the advantages of having a diverse team. When a new vacancy arises, the traditional approach of looking for the “best” candidate is a basic way to approach a hire.

The different strengths each individual can bring to the business can significantly change the performance of an organisation for the positive. Return to work schemes for individuals that leave to raise a family and wish to return to work should be fair, and seamless.

Consideration of the provision of world-class benefits for all employees. These proposals are not new, however, flexible working, flexible benefits where an individual can use the cash equivalent towards the cost of childcare could assist in the challenges of raising a family and holding down a job. Each employee has a different priority, providing a prescriptive set of benefits for all individuals can be stale.

The new approach is to offer an allowance, and the employee can choose to buy benefits from a selection on offer, or offered the cash equivalent.

In our experience, there is a consensus of equality in firms, individuals wish to have a fair playing field when they are being considered for opportunities.

An awareness of unconscious bias needs implementing within firms.

Firms with more than 250 employees now have to publish the Gender Pay Gap, making it public the differential in pay between male and female colleagues. This did highlight the differences in pay between the genders. Findings showed that fewer than one in seven companies remunerate women more than men.

In summary, there is an increased awareness and willingness for firms to improve the entire gender inequality. This is a positive step, and over time, we should see an improvement.