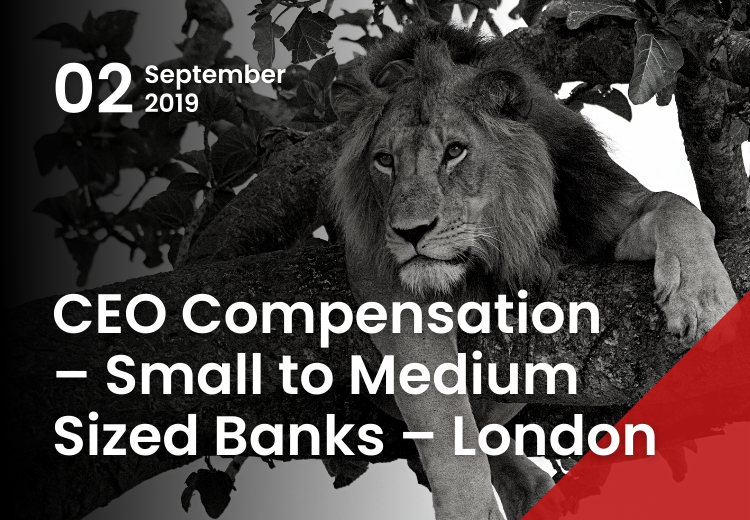 James Sayer is Managing Partner at Sayer Haworth Executive Search. For over 20 years, having lived and worked in the UK, Europe and the Middle East, James has acted as a trusted business partner to source senior leaders within Financial Services.

– CEO compensation remains relatively stable, with no real annual increases. Packages are very much dependent on the size of the organisation.
– Average base salaries are between £250,000 – £500,000
– Most individuals have reached their lifetime allowance caps for pension contributions and subsequently receive a cash equivalent
– There is an expectation of an up-lift in compensation due to the Senior Managers Regime responsibilities
– There is scope to provide further personal development opportunities to CEOs

James Sayer has carried out a survey of CEOs compensation within the Small to Medium sized banks in the UK. This data has also been verified on actual CEO searches James Sayer has executed and delivered on. In addition there are findings to support that firms should consider providing further personal development opportunities to CEOs.

The firms surveyed typically employ 40 to 500 professionals, with average balance sheets of £2 billion to £22 billion. These banks are typically privately held, and not publicly listed.

The survey is compiled of actual data from 45 CEOs in this segment.

A detailed look at CEO compensation

With the increase of regulation and executive pay within Financial Services since the 2008 Financial Crisis, the make up of reward to senior executives can be complex. This white paper has been written to provide a broad compensation guide for a CEO within a Small to Medium sized bank in the UK.

CEO compensation generally comprises of base salary, annual bonus, long-term incentive scheme, pension. There may be other non-cash related benefits which are detailed later in this report.

We have seen a rise in organisations offering flexible benefits, where employees can elect to use this allowance to purchase benefits, or the employee can be paid this amount in a cash equivalent.

The general range of a base salary for a CEO in this segment of banking is between £250,000 – £500,000. The salary, in our findings, forms the largest part of the remuneration for the CEO.

The salaries on offer at the lower end of this scale were with banks that have a branch operation in the UK, and not a full subsidiary; these banks would have on average 25 – 50 employees. The median base salary for CEOs in this segment is £310,000.

At the higher end of the scale, this would be banks that are full subsidiaries in the UK, the number of employees would be up to 500. The median base salary for CEOs in this segment is £445,000.

With the introduction of the PRA and FCA remuneration rules, bonuses are capped at 100% of base salary, or up to 200% with shareholder approval. All the CEOs in our survey were eligible for a bonus, we did not find any CEO who did not achieve their annual bonus award.

The average bonus payments were from 35 – 100% of base salary. There was one example from the survey of a payment of 145%. The median bonus award was 67%. We also discovered Profit Share on offer to individuals within the smaller banks, these were on average 10% of profits of the bank.

A deferral period for Senior Managers, as defined under the new Senior Managers’ Regime (SMR), of no less than seven years, with vesting no faster than on a pro rata basis from the third anniversary of the award; and a deferral period for all other MRTs of five years with pro-rata vesting from the first anniversary of the award.

A rule to require a minimum clawback period for all MRTs of seven years from the date of the award.

The pension arrangements for CEOs vary, the survey revealed that the majority of the CEOs that we surveyed had reached their lifetime allowance to contribute into a pension scheme.

Therefore the common practice was for the individual to receive the cash equivalent in contributions in their normal salary which they would then pay standard income tax of this.

The survey revealed that company contributions were from 6-15% of base salary.

The benefits offered formed the lowest element of the package, typically on offer were the following

The Senior Managers Regime (SMR) have required banks to clearly define each senior manager’s responsibilities. The rules also apply to board members of U.K. units, including non-executive directors who may be based outside of the UK. Banks must confirm annually that senior managers are suitable for their jobs It has been described that you can delegate tasks but not responsibilities, the CEO is now very much held to account for the actions of their firm.Senior managers are responsible for certifying annually that a wide swath of staff are “fit and proper to perform their role.” This includes anyone who could potentially harm the public or the firm, as well as those who are high-earners or handle client money.

With this increased responsibility for a CEO, there is a consensus that there also needs to be a financial package that reflects the increased responsibility and consequences of falling foul of the regulator. A CEO may not intentionally be aware of an action in the Bank that results in breach, however, under SMR, they are now responsible and would need to demonstrate reasonable steps they had taken to reduce the risk of a breach.

At this level of the organisation, the CEO is generally looking at the content and the challenge ahead. As in every case, and this is not unknown, the right package has to be on offer to attract and retain CEOs in their roles.

We find that CEOs who are given full autonomy to run the operation are the most motivated and content in their roles. In scenarios where the Board of Directors and in particular case the Chairman are too intrusive on a day to day operational level, which goes beyond their regulatory obligations, the CEO is generally frustrated and open to looking at new opportunities.

Retention of CEOs is on the whole achieved by rewarding for good performance and providing the necessary trust and autonomy to carry out their duties.

To further add to retention, it should never be assumed that a CEO has all the skills, or does not want further personal development. We recommend that opportunities should be presented to the CEO with external providers to enable them to continue their professional development.

This could be one to one Leadership Development, tailored residential programmes for CEOs, team building with their executive team. There are many programmes available that can provide the CEO with stimulation and further personal development.

Life Beyond being a CEO

The general consensus from our survey, is that when a CEO has reached their final executive role, they wish to then move into a Board appointment. This will be in the form of a Non Executive Director, not necessarily within Financial Services.

When the CEO moves to this stage in their career, they will leave with a good view of the organisation they have been working for.

Our insights in this subject have revealed that the majority of CEOs are happy with their compensation level, they find it fair and reflective for the responsibilities they have. With the compensation rules within the sector, it has not in our opinion reduced the motivation of individuals to want to take on a CEO role.

We have found that what is missing, is the non-financial elements that can be offered to a CEO, this is in the form of personal development opportunities.

Where a CEO is in their first appointment, the suggestion of providing an external mentor is recommended, enabling a new CEO to have a confidential avenue to share their current challenges and provide them with support as they are learning a new skills set.

An assumption can sometimes be made that a CEO has all the skills set, and they require no further training and development, because they are in the CEO role. A CEO should be in the same regard as any other employee and be offered the same opportunities to develop and learn